Wake Up With Sam

Samuel Wittwer joined us in 2005, from 5EFM in Victor Harbour where he debuted hosting Breakfast on Wednesday & Friday Morning, and prior to joining us was hosting 3-6pm. In 2005, he moved to Kadina, and took up 6pm to 9pm on our Tuesday Nights until 2009. After a short break, he hosted the Thursday Night Easy Mix from 5pm till 8pm, as well the Top 50 Countdown through till 11pm.

In 2018, he’s gone back to his roots and has reinvigorated Wednesday Morning Breakfast from 6am on 89.3 Gulf FM, bringing you the best blend of music, news, entertainment and discussion. He finished on air on April 10, prior to commencing new work. However, we do expect that he will be making guest appearances from time to time. 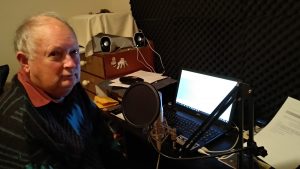 So who is Colin? Well, Colin has to be the hardest working computer at the station. He’s got all your favourite songs stored, and catalogued, and clocks the most on air hours out of all of our announcers. But he doesn’t say much though. He occasionaly may say the time, but he’s a silent partner. […]